No rate change for residential solar 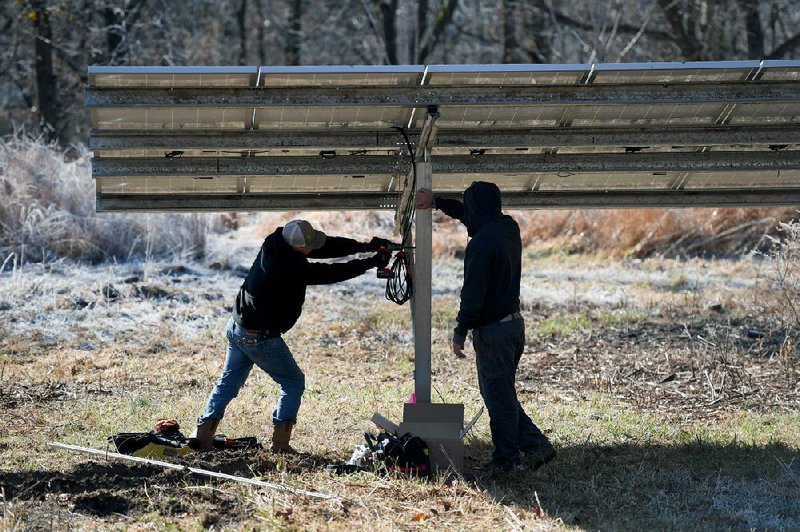 Solar advocates won at least a temporary victory Monday when the Arkansas Public Service Commission issued an order maintaining current rate structures for existing residential and rooftop solar-power users through the end of 2022.

Electric utility providers, however, can seek a grid fee on new commercial and industrial solar projects. That fee is not in place today and would allow the utilities to recover costs that support current operations and future infrastructure development. Regulatory approval would be required for any new grid charges.

Beginning in 2023, utility providers can seek alternative rate structures for net metering. That request must be “in the public interest and will not result in an unreasonable allocation of, or increase in, costs to other utility customers,” the ruling said.

The legislation sparked interest in solar usage from cities, counties, school districts and other public agencies that have established power arrangements with solar companies.

Act 464 also prohibited cost shifting fueled by solar usage. Cost shifting occurs when users leave an electric grid for alternative sources of power. Customers remaining on the grid may have to pay additional costs to maintain and operate the system, making up for the costs not picked up by those who abandoned the grid.

The ruling allows smaller residential solar projects to continue undisturbed while the commission evaluates the potential harm that could be inflicted on customers who remain dependent on the utility-operated electric grid for their power needs, according to PSC Chairman Ted Thomas.

“Act 464 prohibited unreasonable cost shifts,” Thomas said Monday. “There is potential cost shift from bringing on large (solar) projects. We want to measure that cost shift, in terms of dollars per month per customers, and then figure out if we need a grid fee at that point.”

That led to the commission keeping current rate structures in place while evaluating cost shifting as more solar projects are implemented, Thomas said. “We just don’t have that many projects in place right now,” he said. “We do know that some cost-shifting does occur, but we don’t know exactly to what extent.”

Electric providers will have the option of seeking an added grid charge, or fee, for solar facilities that generate more than 1 megawatt of power. “Utility companies can come in today and ask for a grid fee on any project over 1 megawatt,” Thomas said.

Solar supporters were pleased with the ruling. “Today is a solid victory for those who care about fairness and clean energy jobs in Arkansas,” said Glen Hooks, director of the Sierra Club in Arkansas.

Electric utilities were more tight-lipped, saying they were evaluating the order to fully understand the details.

Entergy Arkansas, which has proposed the option of imposing grid fees on solar users, welcomed the opening of those charges.

“The commission’s decision to provide the opportunity to implement a grid charge for some customers with private solar systems is a step toward establishing fairness for all customers,” David Palmer, Entergy’s director of regulatory affairs, said in a statement issued Monday.

“However, significant work remains to ensure that customers with private solar systems pay their fair share of the cost of the grid that serves them,” the statement said. “Entergy Arkansas remains committed to leading the state’s solar future by bringing low-cost renewable resources to all customers, while controlling customer costs and ensuring electric-grid reliability.”

Entergy Arkansas has three large solar projects underway in the state as part of a partnership with a Florida-based solar developer. The utility operates an 81-megawatt solar array in Arkansas County and is developing two 100-megawatt facilities, one outside Lake Village and the other near Searcy.

Overall, the Arkansas commission is working to bolster solar development while ensuring traditional electric customers are not burdened with additional costs.

“We want consumers to have the best option without shifting costs to other customers,” Chairman Thomas said after the ruling. “That’s where nirvana is. We also want to let the utilities sell (solar) projects and compete. What we’re trying to do is put more options in the hands of consumers.”

Solar supporters feared that rate-structure changes would slow the industry’s advance. The ruling was encouraging for Seal Solar of North Little Rock.

“Solar is one of Arkansas’ most promising industries, with unlimited potential for growth,” said Josh Davenport, co-founder and chief executive. He said the order “provides the certainty we need to capitalize on recent investments we’ve seen from the private and public sectors alike to empower economic growth and energy independence across the state.”