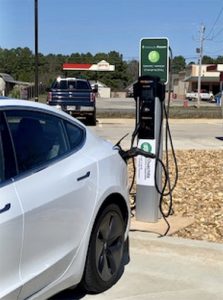 Camden is charging into the future of electric vehicles.

The charging station will be free to the general public and hotel patrons for the next year.

“We wanted to encourage more use of electric vehicles.  Getting infrastructure in place is critical to expanded use of EVs,” Mark Cayce General Manager of Ouachita Electric Cooperative, said in a statement.

According to Cayce, the hotel’s strategic location near a highway intersection made it ideal for the charging station’s location. Ouachita Electric worked with hotel leadership and Today’s Power, which provided the EV charging infrastructure, to install the station.

Today’s Power Marketing and Public Relations Coordinator Jennah Denney points to the new electric charging station as a win for the Camden economy. “It makes people stay in Camden and spend some time here, finding out what this city has to offer,” she says.

Already, many municipalities throughout Arkansas offer electric vehicle charging stations, with some of the stations providing free service. Little Rock has the highest number of electric charging stations in the state with 120 within a 15km radius, according to ChargeHub.com. Of that total, 40 stations are free. There are 93 Level-2 chargers and 27 Level-3 chargers.

The municipality with the third highest number of electric chargers is Bentonville, which has a total of 36. There are eight free stations, and 23 stations are Level-2 and 13 are Level-3.