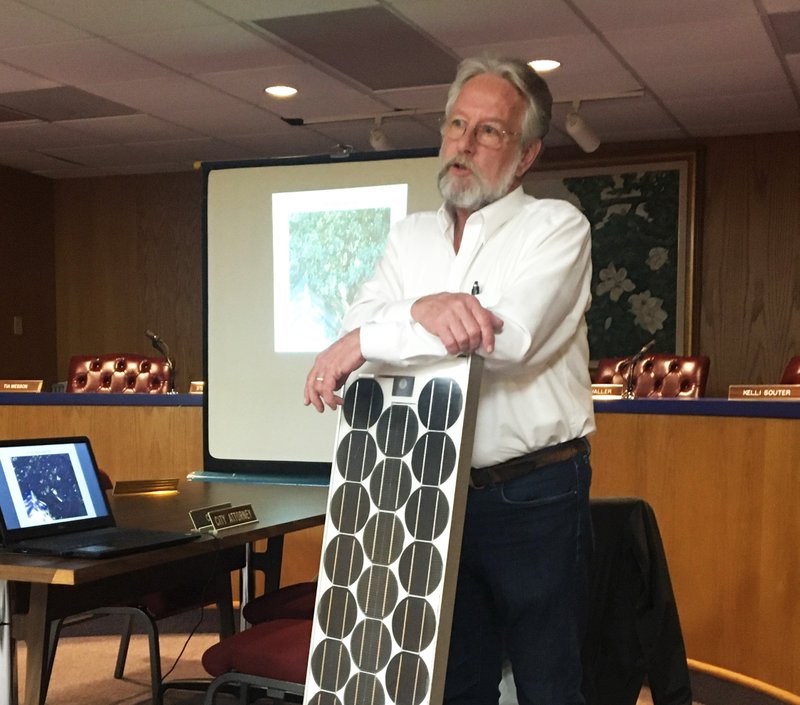 A presentation from a solar panel expert Thursday night at the Magnolia City Council Chambers educated several community members about the potential savings of solar.

William “Bill” Ball, CEO of Stellar Sun of Little Rock explained his career with solar and the benefits he had seen people gain from using the alternative form of energy.

Ball is the author of Arkansas first renewable power law and has spent years helping lawmakers develop laws that keep solar on equal footing with other types of energy.

Ball’s first company which began in 1976 specialized in greenhouses, sun rooms and solar water hearting. In 1980, Ball purchased his first PV modules and began his life-long career in developing solar power applications while supporting his solar business efforts with the construction arm of the company. In 1991, Natural Environments, Inc., also began doing business as Stellar Sun, with the intent of focusing more on renewable energy.

Ball has installed solar energy at Logoly State Park. Another example of a project he has worked on was a 4,300 square foot home in Little Rock with solar that had a monthly utility bill of about $12 a month.

Another example of a major project is the largest privately owned solar in the state-a 16-acre solar project in a farm outside of Lonoke. The savings proved to be massive.

“Sixteen acres of solar offset 14 car loads of coal,” he said. “He was paying about a million on his electric bill.”

The cost of the project is $3.5 million and will take five and a half years to pay off, but will end up saving the farmer in the long run, Ball said.

Solar panels do not often need cleaning, but since the farm may generate dust, there will be a cleaning once a year. People who have solar at their home sometimes rinse the panels off but pollen is not the most detrimental thing that happens to a solar panel–bird poop is, he said.

As improvements to solar continue to be made, more people are noticing, he said. He held up a panel from 1980 and told the group it still puts out the same energy as it did in 1980. Newer panels put out 1800 watts now instead of 33 watts, he said.

“You are starting to see solar coming in because it is starting to make economic sense,” he said.

Non-profits, schools and cities don’t have to pay up front for the solar panels and yet they automatically start saving money. There is a $3 million savings over a thirty-year period, he said.

“There were good points made on both sides and I would like to point out that Entergy is pro-solar,” he said. “It’s a good thing it just has to be allocated fairly. We have to make sure others are not subsidizing the costs for others.”

“It’s difficult to find the fair value in it and we have to make non-participants are protected as well,” he said. “When the customer is taken care of, that’s when we know it’s right.”

Jan Hutcheson, secretary and accountant for the Magnolia Housing Authority, said housing authority representatives decided to come to the meeting because their maintenance employees had talked about the possibilities of how it could save money.

“We are the government tax dollars at work and we are always looking to save money. If it would save money, that would be a great thing,” Hutcheson said.

Richard Wise, director of Magnolia Housing Authority had questions about how many trees would have to be taken out around the housing authority if they were to decide to switch to solar and if they could just try it on one property before committing to it on all the properties.

Ball told him that trees would have to be cut in order to place the panels but that there would still be trees. Ball also said that the housing authority could have regular energy as well as solar for a try-out period.