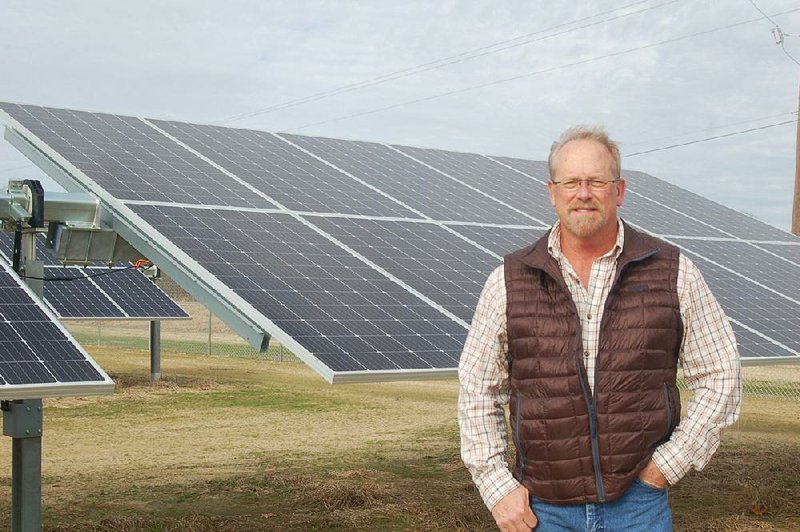 Don Kittler Jr. stands Thursday next to one of the solar panels that fill a 20-acre solar farm on U.S. 70 in Lonoke. Electricity from the facility will be used to help power farm operations.

LONOKE — A Carlisle farmer flipped the switch Thursday on a nearly 3-megawatt solar farm that he says will provide 90% of the energy needs for the 10,000 acres he tends in Lonoke and Prairie counties.

Don Kittler Jr., a farmer since 1983, started on the project in earnest at the start of the year. Construction started in June and was completed this month.

Within minutes of being powered up, solar panels that had been lying horizontally began tilting upward and to the east catching what sun was available on a partly cloudy morning. Kittler’s solar farm is set on 20 acres on the eastern edge of Lonoke along U.S. 70. It will produce about 3,000 kilowatts of power. A megawatt is equivalent to about 1,000 kilowatts.

Kittler said electricity costs last year amounted to more than $400,000, with most of that being spent on providing power to irrigation wells and drying and storage operations on his farm. Electricity, he said, accounts for up to 8% of his total operating costs.

The array won’t produce more energy than the farm consumes, and Kittler will continue using Entergy Arkansas as a provider for other electrical needs, he said.

Along with saving money on electricity costs, a federal tax credit of up to 30% specifically for solar projects spurred the development, Kittler said.

Kittler Farms has about 75 employees in a farming operation that also includes marketing services and construction for irrigation and grain storage. Kittler raises corn, soybeans and rice that is not genetically modified.

Kittler’s solar field of dreams is adjacent to Lonoke Field, home of the Lonoke High School Jackrabbits, the Lonoke Bullets, a baseball team sponsored by the American Legion, and other teams.

Kittler laughed when asked if he had thought about whether there could be a slugger with enough power at home plate to reach the panels. He said he, indeed, had given some thought to such a prospect and, no offense to the baseball players, hoped there wasn’t.

The farmer likely can rest easy, said Kevin Pack, manager of the Bullets, a team for players ages 13 to 19. The left-field fence is 320 to 325 feet from home plate, he said. The closest solar panels to the field are about 100 feet beyond the left-field fence.

“I don’t think we have anybody who can hit that,” Pack said. “You’re talking big leagues to be able to do that.”

Wendell Stratton, chief executive officer of Stratton Seed in Stuttgart, invested in an 805-kilowatt solar farm for his operations a couple of years ago. It went online in May 2018, providing solar power to Stratton’s four sites across the Grand Prairie region of eastern Arkansas.

Kittler’s solar farm is about three times larger than Stratton’s.

Like Kittler’s, it was built by Solar & Renewable Power Systems in Jackson, Tenn. “It’s doing everything it was designed to do, plus some,” Stratton said.

News of proposed solar projects, large and small, are cropping up around the state, Stratton said. “People see the value in it,” he said. “You have to look at it long term, with a payback [of the initial investment] of some seven to nine years for us.”

Like Kittler’s solar panels, Stratton’s automatically rotate flat as the sun starts to go down or when high winds are expected. They’ll go vertical in case there’s a forecast for hail, Stratton said.

“We haven’t had a hailstorm yet, but we’re told it can withstand a lot, so most likely, it can handle a baseball, too,” he said.