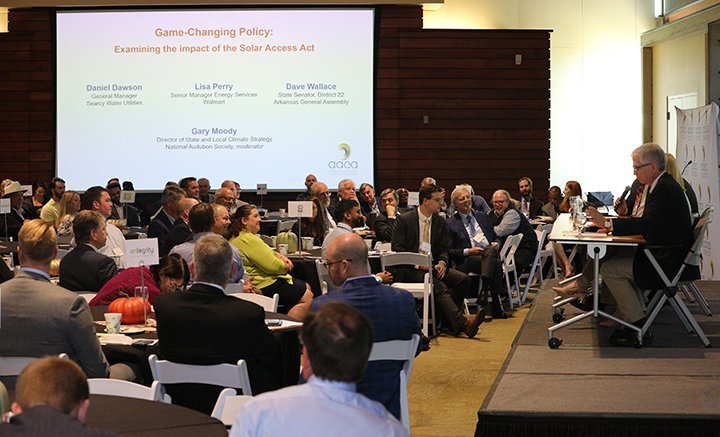 Four awards, including one surprise award, were given out at the Arkansas Advanced Energy Association’s 8th annual meeting and policy conference, emPOWERing Arkansas, held Oct. 8 at Heifer International in Little Rock.

Gary Moody, director of state and local climate strategy for the National Audubon Society, received the Advanced Energy Rising Star award, which recognizes a “rising star within the industry for contributions to his/her organization and growing impact on the industry.”

“Gary played an instrumental role in engineering the success of Senate Bill 145, the Arkansas Solar Access Act, during the 2019 legislative session. Thanks to his coalition, leadership and strategic insights, the bill passed with tremendous bipartisan support,” AAEA’s Heather Nelson said.

Today’s Power received the Advanced Energy Business Innovation Award, which recognizes an AAEA member company for “courage, savvy, and innovation to expand the market for its products and/or services.”

“One of TPI’s most recent projects, the solar power system for the city of Fayetteville is groundbreaking for its on-site utility scale storage. Overall, electric consumers will save more than 2.5 million dollars annually as a result of TPI’s solar project,” Nelson said.

“Senator Wallace’s solar access act enables solar leasing for all solar customers and creates a needed avenue for third-party purchasing for non-tax entities. The legislation has had a positive impact on the state’s solar market from the drafting process to the bill signing. Senator Wallace’s steadfast commitment to improving Arkansas’ solar landscape and his exceptional personal leadership was critical to the ultimate success of the Solar Access Act,” Nelson said.

The surprise award, the Advanced Energy Policy Pioneer Award, was given to Mark Cayce, CEO of Ouachita Electric Cooperative Corp. of Camden.

“Mark Cayce has been advocating for fresh ways to approach energy efficiency and solar in Arkansas now for over a decade,” Nelson said.

“Today I can announce that after our most recent rate study, on Oct. 17 we’re going to be seeking a 4 and a half percent rate decrease at Ouachita Electric Cooperative,” Cayce said.