Power-generation facility going in at port; savings put at $150,000 in first year 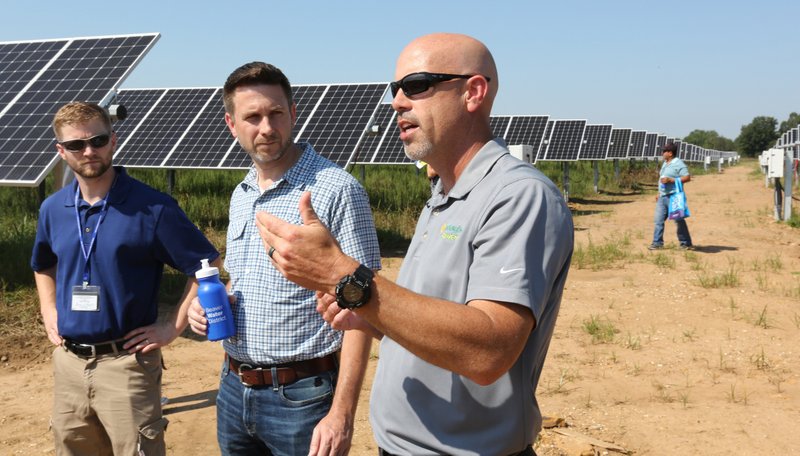 In this file photo Matt Irving (right), vice president of operations at Today’s Power, describes the new solar array at the Westside Wastewater Treatment Plant following a flipping the switch ceremony in Fayetteville. Pulaski County has reached an agreement with Today’s Power to build and operate an 8-megawatt solar facility that will power county offices. – Photo by David Gottschalk

Pulaski County announced Thursday that it will harness solar power in hopes of helping the environment and its bottom line.

The county has reached an agreement with Today’s Power, which calls for the Electric Cooperatives of Arkansas subsidiary to build and operate an 8-megawatt solar facility that will power county offices at a savings of at least $150,000 in the first year.

The Today’s Power project will use 40 acres at the Port of Little Rock, which also will use the power generation to offset its electricity costs, and 12 acres near the county’s criminal justice complex off Roosevelt Road. County Judge Barry Hyde, said the $13.6 million project likely will be operational in the first quarter of 2020.

“This project will not only improve the eco-health of our county, it will save taxpayers money and add value to the ever-expanding Little Rock Port as well,” Hyde said at a news conference Thursday to announce the initiative.

Today’s Power will build, maintain and operate the solar facility for the county. The county is projected to save at least $3 million over the life of the 20-year agreement.

Construction is expected to begin “any day,” Hyde said.

The project is one of 17 solar projects around the state in various stages of development that the Arkansas Advanced Energy Association said was enabled by Act 464 of 2019.

Katie Laning Niebaum, the association’s executive director, said the Pulaski County project exemplifies the new opportunities available under the act, commonly known as the Solar Access Act. Among other things, it allows third-party financing or leasing.

Arkansas already is counted among the fastest-growing states for solar job creation, with its biggest year for solar installation coming in 2018, according to GMT Research and the Solar Energy Industries Association. It said the state added 188 megawatts of solar generation last year, ranking 18th among the 50 states.

“No private or public entity could lease a solar facility prior to [Act] 464,” Niebaum said. “The reason why it’s helpful in the case of a government entity like Pulaski County — which doesn’t pay taxes and can’t take the benefit of the federal tax credit that’s available — [is] by the agreement with a third-party, you’re able to capture those savings through a structured deal like that, making the overall costs go down.”

She said Pulaski County was a “vocal supporter of the Solar Access Act during the legislative debate and, as a result, all 75 counties have the opportunity and enhanced access to low-cost solar power.”

The savings, in turn, can be used to provide money for “deferred costs on other priorities,” Niebaum added.

Michael Henderson, executive vice president of Arkansas Electric Cooperative Corp. and president of Today’s Power, said his company has other ways to keep costs down and add value to the areas the solar power facilities serve.

“We’re part of the Electric Cooperatives of Arkansas,” he said. “Our endgame is not to be a money-making entity. We’re more a quality-of-life entity. Our aim is to give value to the end user. We do that through our solar projects.”

By not answering to shareholders, “we pass those [savings] on to our customer,” Henderson said. “That’s what helps push the price down. We own it, we operate it. All they’re really doing is really buying kilowatt hours from us instead of Entergy.

“They are just going to buy less from the traditional utility and buy more from a project that is designed for them, it’s on their property, it brings tax base into their school district.”

Bryan Day, executive director of the Little Rock Port Authority, said he hasn’t calculated the potential savings for his agency, but its use is “relatively small” — about $16,000 annually for the 5,000-square-foot building housing offices and meeting space and for the 1,200-square-foot transit shed.

But he expects the solar generation to serve as “a good economic development tool” for the port, which has 400 companies employing 4,000 people in its industrial park.

“Many foreign prospects do ask about renewable options,” Day said. “I know several public entities are exploring it right now, and I know Entergy is expanding their capacity so I believe the next few years will see great opportunity in this endeavor.”