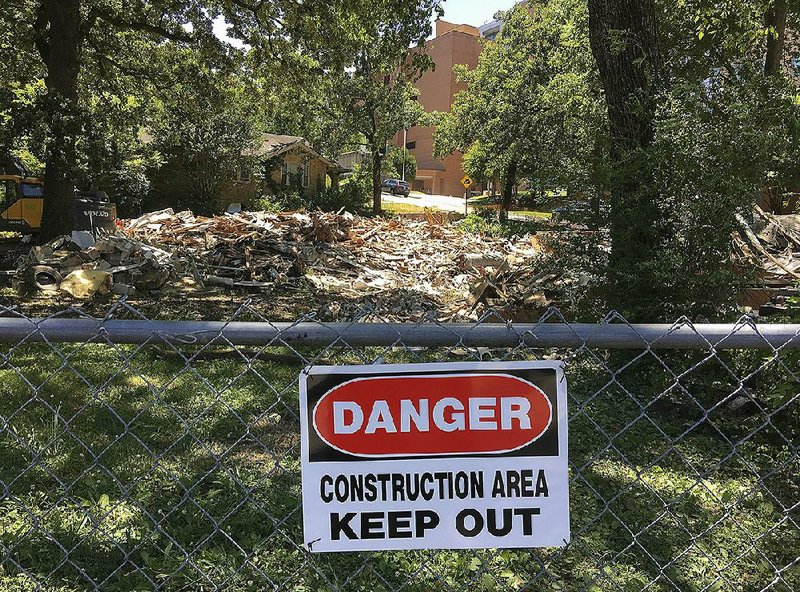 This photo taken June 13 shows where houses between Pine and Cedar streets near the University of Arkansas for Medical Sciences campus were demolished as part of an ongoing project to turn the section into a single boulevard to expand UAMS parking. – Photo by Staton Breidenthal

Board of trustees Chairman John Goodson described the plan, which includes additional parking, as the system’s largest-ever construction project.

The trustees’ unanimous approval came at a special teleconference meeting announced just three hours before the 1:30 p.m. session in the UA System’s Cammack Village offices attended by some trustees and representatives of the medical school and others.

Trustees still must approve financing for the project, which would come through a revenue bond issue. The plan also will require some approvals from Little Rock officials.

The project includes building a $50 million electricity generating plant to supply backup power to the east side of the UAMS campus and realigning Pine and Cedar streets into one boulevard, thereby expanding parking.

According to a presentation provided to trustees, the project will move UAMS into the top 1% of academic medical centers for energy efficiency, address $116 million in deferred maintenance and produce a net $96.2 million utility and capital-cost savings over two decades.

After a presentation to the board led by UAMS Chancellor Cam Patterson in March, members tabled discussion of the energy-conservation plan, recalling financial difficulties at UAMS in early 2018 and questioning the expenditure.

“We just didn’t have a lot of time to look at the project proposal; we just had questions,” said Trustee Steve Cox in an interview after the meeting Tuesday.

Trustees heard a second presentation about the project at their May meeting, including discussion of an audit to assess the cost-benefit ratio of the project and the bidding process, but took no action.

In short remarks before Tuesday’s vote, Goodson praised the “due diligence” of UAMS officials, who he said had been working “hand in hand” with trustees to understand the proposal.

During discussion, Goodson and other trustees expressed support of the project’s revised plans, including a $500,000 discount negotiated with contractor Bernhard Energy Solutions, a Louisiana company with a Little Rock office.

Cox said after the meeting that he came away thinking the project was “well thought-out,” stressing overall savings from energy costs and the importance of the generator plant’s backup power system in hospital settings.

“People are hooked up to lifesaving devices, and we have to keep that power running” in inclement weather, he said. “This thing has gotta be dependable, reliable, and kick on when it’s needed.”

As laid out in materials reviewed by trustees, other elements of the project include upgrades to electrical equipment, chilled water and heating plants and interior and site lighting.

Savings will come from electric, natural gas and water costs, including allowing the health sciences center to take advantage of a special rate from utility provider Entergy, officials have said.

The project is expected to create 300 parking spots in the Pine and Cedar streets’ area, as well as a new campus entrance.

The bond issue that trustees must approve in a separate vote also is subject to approval by the state Higher Education Coordinating Board, which will review a bond feasibility study and information about debt amortization before signing off, said Alisha Lewis, chief communications director at the Department of Education.

Clark said next steps for the project include formally requesting city approval, which is likely to include a request for financial assistance from the city on the street realignment.

UAMS staff members have met with the mayor, the city manager and members of the city Board of Directors, Clark said. UAMS has been waiting for the trustees’ approval before making any kind of request.

Funding “would be helpful. … They understand that we’re a significant economic engine for the city,” she said.

Mayor Frank Scott Jr.’s spokesman, Stephanie Jackson, said that the mayor was “conceptually” supportive of the expansion, but that his office had not received any official request for funding, so “that’s kind of where we stand with that right now.”

She said the mayor does support redevelopment of the Pine and Cedar street corridor to improve walkability in the neighborhood and to create jobs as the UAMS project moves forward.

“As it relates to economic development opportunities, this is a major deal for a core area of the city,” she said.

Patterson was out of town and UA System President Donald Bobbitt was attending a funeral, and they were not available for comment at Tuesday’s meeting.

Also at the meeting, trustees unanimously approved the salaries of dozens of athletics staff members, administrators and faculty members beyond the limits for those positions established by state law. Arkansas law permits colleges and universities to go over the line-item maximum to pay some campus employees.

The salaries, which are maximum potential salaries including postseason compensation for coaches, ranged from $81,600 for assistant trainer Natalie Trotter to $4,700,000 for head football Coach Chad Morris.

On Monday — the day before the trustees’ vote to approve the energy project — Clark and the UAMS vice chancellor for communications and marketing, Leslie Taylor, attended a meeting of the Capitol View-Stifft Station Neighborhood Association to discuss the plan and address concerns from people who live nearby. (The timing was a coincidence, Taylor said.)

Clark discussed the ongoing demolition of 28 houses near the planned Pine and Cedar street redevelopment, some of which she said had been owned by UAMS for decades.

Those houses would “not be completely down, the rubble gone, until October,” she told the neighborhood group.

A few people at the meeting raised concerns about the impact of the project on flooding in the residential area. At least one person was fearful flooding would increase, asking about an increase in impermeable surfaces where additional UAMS parking spaces are planned.

Clark said that she had been put in charge of improving sustainability and that UAMS welcomed feedback on related concerns.

“We want to be as green as we can possibly be,” she said. “I can’t tell you exactly what that finished product is going to look like … [but] we are trying to be good neighbors.”

UAMS also recently received a $30,000 grant that would pay for a small track and exercise area on the campus’s east side, which neighbors would be invited to use, she said.

After the meeting, the association’s president, Hunter Windle, said that he had heard pretty much what he expected and that it was helpful that officials had appeared to discuss concerns.

A group from the association is scheduled to meet Thursday with UAMS representatives, he said.

CORRECTION: Arkansas law permits colleges and universities to go over the line-item maximum to pay some campus employees. An earlier version of this article did not make that clear.