Brian Kirksey, a cattle, ornamental shrub, and timber farmer in Amity, Arkansas, says renewable energy is poised to play a big role in rural areas, including providing a significant part of the electricity needs for chicken houses, dairy operations and residences.

Kirksey talked about the opportunities for solar and other renewable energy sources following a grower panel discussion featuring the Southeastern Swisher Sweet/Sunbelt Farmer of the year state winners. The panel meets the day before the Sunbelt Agriculture Exposition opens in Moultrie, Ga.—Oct. 17-19, this year.

Kirksey was the Swisher Sweet/Sunbelt Farmer of the year from Arkansas in 2008.

He has experience with energy distribution as a board member with the South Central Electric Cooperative in Arkadelphia, Ark., for 15 years as well as serving on the board of the Arkansas Electric Cooperative Corporation (AECC) for three years. AECC oversees the 17 member cooperatives serving 500,000 customers in the state.

Renewable energy is playing a bigger role in the co-op’s energy profile. “We’re buying wind energy from Oklahoma,” Kirksey says. The co-op uses about 23 percent renewable energy, including 16 percent wind and solar, and 7 percent hydroelectric. A gas plant also will bridge the gap between coal and renewable energy.

“But solar is coming on fast and furious,” he says. “Some people ask why we want to be involved in solar, since that will reduce co-op revenue. But it’s coming and we want to be on the cutting edge of adding technology instead of watching it happen. It will help us and will benefit our co-op members.”

The key, he says, will be as an option during peak use. “Co-op power is bought on the four months summer peak demand average—June, July, August and September—and the next eight months is charged on the peak demand from the average of those four months,” he says. “Solar will reduce the amount of energy bought during those peak periods of high use.”

He says the cost for installing solar energy has come down significantly in the last ten years. “China is a big player in solar energy component manufacture,” he says. “Solar installation for a residence is now about $10,000. Just ten years ago, that would have been closer to $100,000.”

The opportunity for farms is promising. “We have about 500 chicken houses in our co-op,” he says. “In summer, when temperatures reach 96 degrees, every fan in every chicken houses is running. Solar will help reduce energy use during those peaks.”

He foresees a time, and soon, when every chicken house roof will have solar panels. “Farmers will need to renovate to strengthen the roofs to hold the panels,” he says.

He believes farms across the country will convert a lot of their energy needs to solar over the next ten years. Dairy facilities, barns and farm residences all offer options for solar panel installation. “The government is offering tax credits,” he adds. “It’s hard to comprehend what has happened with solar energy just in the past five years. We’re excited about the opportunity and how it will change the energy business.”

Kirksey says the AECC’s portfolio of generation includes 17 percent renewables—wind and solar—and 7 percent hydroelectric. The rest is a combination of almost equal amounts of coal and gas generation. “Arkansas electric co-op believes so strongly that solar is the next major form of energy generation they formed a solar company called Today’s Power Incorporated (http://www.todayspower.com/).”

He says solar users will still need electric power to operate, “until something is available to store energy.” Solar will be primarily used during daylight hours until affordable storage is available. He adds that batteries area accessible but too costly to justify the investment. “That will be something to watch for in the future.” He says coal plants still operate in Arkansas, and will continue to provide energy for many years. “Coal will not be completely eliminated as an energy source.

“These are exciting times for agriculture and renewable energy,” he says. 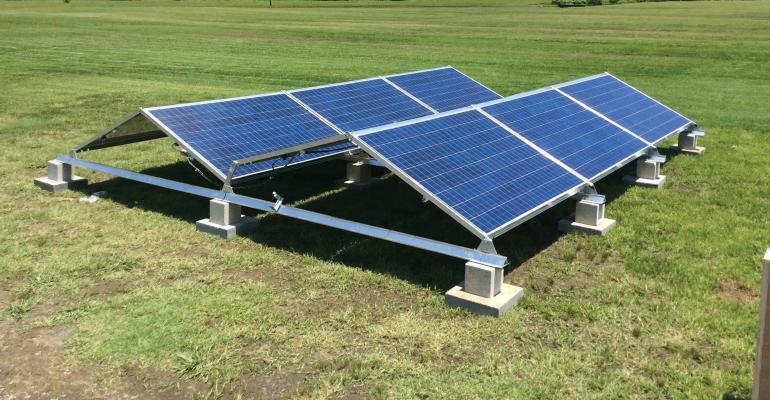